Cubs or no cubs

Who does not have a fascination for large mammals with preditoral instincts? The brown bears or grizzlies definitely make this category and are somewhat mythical for their strength, fierceness and size, yet they look as cute as can be. I wanted to experience this seemingly contradicting perception in real life and made my first trip to Katmai National Park and Preserve in Alaska during August 2011. I vividly remember the first evening in Kukak Bay when I came eye-to-eye with a large female brown bear who was fishing in the river for salmon. It made a lasting impression, and got me hooked on the species (Ursus Arctos). I wanted to know more about them and document their behavior with my photography. That first week with the bears along the Katmai coast was great and provided lots of good opportunities. We ended up in Geographic Harbor were the bears continued to fish to gain the necessary weight for the winter hibernation. 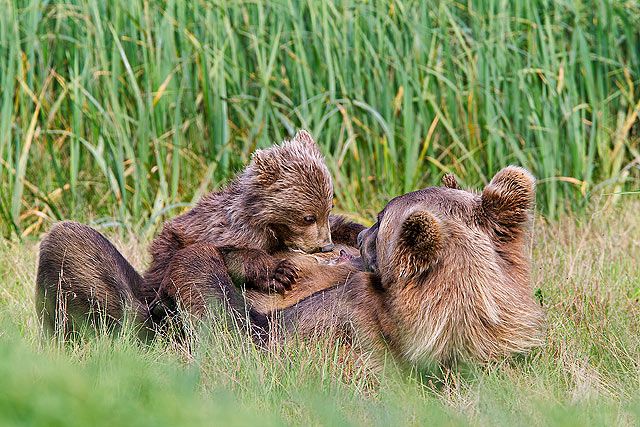 The highlight of the week came when a sow (female brown bear) showed up in the low grass with her two spring cubs. We watched them from a distance eating grass and move slowly through the meadow. After an hour both cubs disappeared in the grass and took a little nap. It was time to look for other bears to photograph, when all of a sudden the sow lay down on her back and started nursing both cubs. A tremendous excitement and adrenaline rush took control of me, while I got in the right position to photograph the behavior. I can not remember how long it took, but I made a terrible mistake which I figured out later while I was looking at my great images at the end of the day. Most of them were unsharp or had motion blur, due to slow shutter speed. In my excitement I had forgotten to change my settings and just fired away capturing this great wildlife moment. Had I been more thoughtful, I would have checked my settings then and there after a couple of test shots, and raised my shutter speed. I ended up with precisely two sharp images of the whole scene, a very disappointing result for such a great moment. I vowed to myself that I would come back the next year to get some great images of the little spring cubs. The lesson here was simple: even though the action is amazing, do not let yourself get in the way of common sense, and check your settings regularly to prevent mistakes.

The brown bear breeding season runs from mid-May to mid-July, with the mating activity being at its peak during the month of July. If the breeding is successful and the female eggs are fertilized by the male sperm, they go through a stage of delayed implantation. Instead that the fertilized eggs get implanted in the uterine wall, they float freely in the reproductive tract for the next four to six months. In order to make the breeding a success the sow has the challenge to gain enough weight before the denning and hiberation sets in to be able to sustain herself during the inactive winter months. When the weight gain and excess calorie intake has been successful the fertilized eggs implant on the uterus wall and begin to develop again. The delayed implantation is the reason that cubs are born in the den between January and February. Newborn cubs are very tiny, naked, toothless and relatively helpless and weighing less than one pound. The naked cubs crawl across the mother's hair, looking for a teat and begin nourishing on the warm, rich milk. The extra fat reserves the sow has accumulated during the months before denning are converted in milk to nurse the cubs. Sows can have one to four cubs, but most commonly have two or three. A mother and cubs are the last to leave the den around April/May and since their birth four months ago the youngsters have developed into boisterous small bears weighing about 12 pounds.

The spring time is a dangerous time for the cubs, and about one-third never live to see their first birthday, and about 60% never reached adulthood. Cubs die of starvation, diseases or get killed by other adult bears. Large male bears in particular are a threat to the yearlings. They often kill the cubs of a female to get her back into heat for the upcoming mating season. Cannibalistic behavior is not uncommon in the bear population, and this is why females with a new litter of older cubs stay clear of other bears and show protective behavior. The cubs that survive the first year have a good chance of reaching adulthood, as the mortality rates drop dramatically after the first year. During the next years the mother will learn the cubs to be self sufficient and teach them how to feed on grass, a variety of berries and clams, and learn them how to hunt and catch fish during the annual salmon runs.

The next big hurdle in a cub's life is the weaning, when adolescents are driven away to fend for themselves. The young bears are generally weaned from their mothers during their third summer, at the age of 2.5 years. Some are kept an additional year, and rarely do females keep their offspring until the start of the fifth summer. The weaning process can be very abrupt as the female flat out quits to be a mom, and from one day to the other starts chasing away her cubs in an aggressive manner. When the cubs figure out that mom doesn't want them anymore they leave and often remain together for a season or two, after which they approach maturity and inevitably part company to live on their own. Soon after the cubs left the mother went into estrus and a new mating cycle will begin.

I went back in July 2012 and spent a considerable amount of time in Hallo Bay, a large open meadow with scattered driftwood as backdrop, and the large glacier of Mount Steller feeding the cold water tidal streams that float into the bay. Although there were plenty of bears around roaming the meadows for fresh shoots of grass, there were no cubs to be seen. After talking to some experts and doing research the following circumstances might be the reason why no female bears with cubs were present. A relatively weak salmon run in 2011 and one of the strongest winters in Alaska's recent history are considered the main reasons why less cubs were born in the first place. With the strong winter delaying the growth of fresh berries well into the summer, the food source remained scarce throughout the early season. That combined with the usual casualty rate of young cubs who fell prey to larger bears, might clarify the situation. It seems likely that the cubs born that year stayed away from the large open areas, and females with their cubs kept hiding in the thick alder brush up on the mountains. My mission to document cubs was again moved forward to the next year.

This year I made the last minute decision to go back to Katmai National Park and Preserve again and test my luck with the cubs. The first week of August usually provides the best timing for seeing cubs and fishing behavior, as the annual salmon run is just starting. The previous two weeks had been extremely nice summer weather in Alaska with temperatures running up into the 80s with clear blue skies. Two female bears and cubs were spotted in Hallo Bay prior my arrival, which made me think my odds had finally turned. Upon my arrival at Anchorage airport the weather in Kodiak Island had changed, and the island was covered in a thick and dense cloud cover with visibility limits well below the minimum flying requirements. The weather in Alaska can change by the minute, so it is always wise to build in some spare travel time. I needed that this time, and got stuck for two days at Anchorage airport before a weather window finally cleared and I could fly to Kodiak to meet up with the float plane service to Katmai.

On board of Chuck Heim's Coastal Explorer we started in Kukak Bay with a light drizzle in the late afternoon. The next day we made our way to Hallo Bay, which is a large open exposed bay, and only accessible by boat when the weather and especially the wind is reasonable. Excited about the landing that afternoon we made our way with the skiff at high tide into the river. At first sight the meadows seemed completely empty, no bears to be seen at all. We landed and walked the whole perimeter of about 3 miles and did not spot any brown bear, let alone any female with cubs, which had been spotted earlier at the same place. Usually, there are always some bears hanging around, especially as there was salmon running in the river. Disappointed we retreated back to the boat and decided to leave Hallo Bay as the weather was going to turn worse quickly with strong 40-knots winds and rain in the forecast.

We made our way along the Katmai coast in southerly direction towards the secluded bays of Geographic Harbor, the same place where I encountered the female with two spring cubs in 2011. Due to the weather forecast for the remainder of the week, which was going to be pretty much the same for every day: strong winds, low hanging cloud cover, rain and fog, it was decided to stay in Geographic Harbor. The bear activity was pretty good, with lots of bears fishing in the tidal streams for pink salmon, the first of the salmon species to run up the rivers on this side of Katmai from the Shelikoff Strait. The photography was quite a wet affair with the constant rain and drizzle, and a good rain cover for the lenses is an absolute necessity. The low light levels made shooting at high iso-levels between 2000 - 6400 the norm, which is not ideal for ultimate image quality and leaves quite a bit of luminance noise in the files, especially in the darker color of the brown bears. Another challenge was the auto-focus on the subjects with the fog reducing the contrast and the rain acting as a curtain to throw off the focus.

My quest for cubs was only partly met. A female and her three year old cub were strolling the river banks in search of fish every day. Sometimes playing together, sometimes sitting along the river bank and watching the river for passing salmon, and sometimes the mother teaching her cub how to fish. Upon catching a fish the cub would roar loudly and try the steal the fish from the mother, who always managed to take the first bite and than share the remainder with her cub. Late in the afternoon one day we got a call from a local fisherman in a nearby cove. He had spotted a female with three spring cubs on the beach. The excitement and adrenaline started flowing again, although the conditions were more than lousy, we made our way over to check it out. Once we pulled up at low tide along the stretched out beach, the mother and cubs were already on their way to seek cover for the night in the thick alder brush. No luck this time. It seems that my quest for spring cubs has to wait yet another year...

More images of my Alaska brown bear 2013 experience are on my website at www.clemensvanderwerf.com