Sometimes you are looking at something and it seems to make no sense at all. We all have those moments that we scratch our heads and think: "I don't get it. What is going on here?" It only starts to make sense if you keep looking and try to place yourself in the subject's mind. I had such a moment when I was hip deep standing in the water in Tampa Bay, Florida, observing the weird behavior and interaction of Brown pelicans and Laughing gulls. 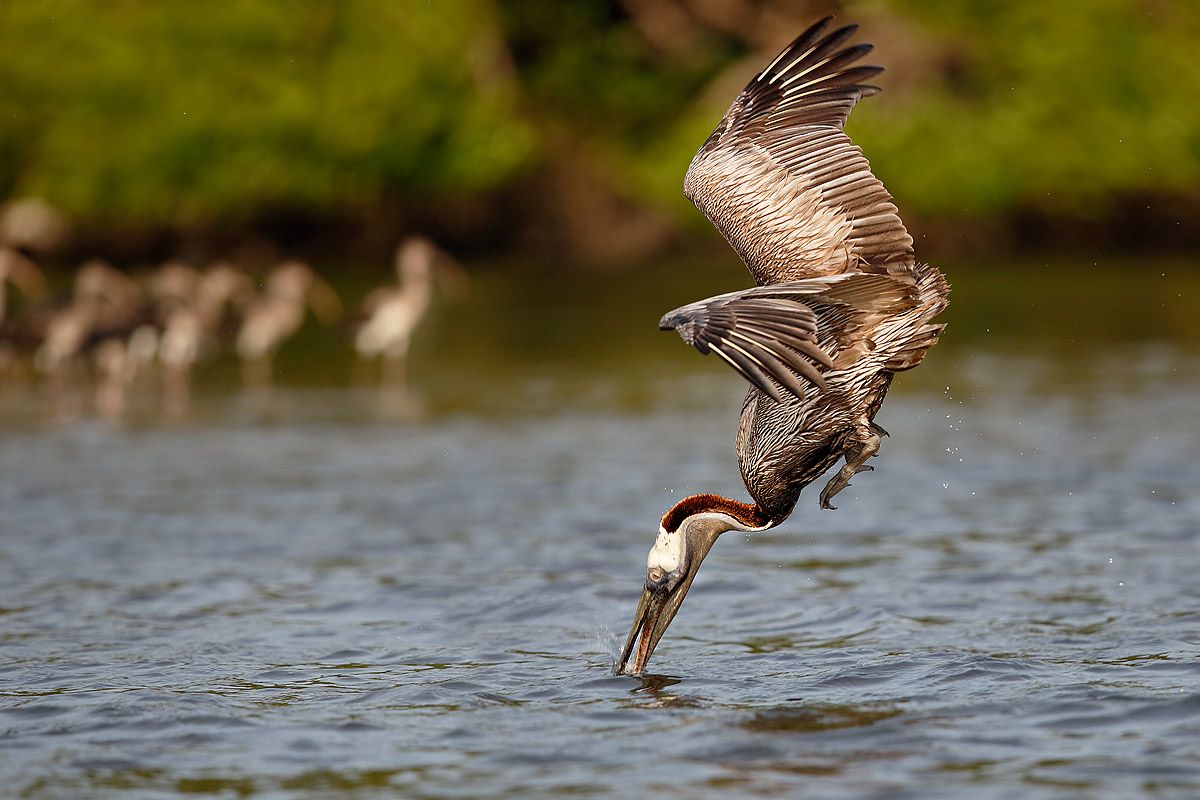 While soaring above the water the pelicans scan for any fish that may wander close to the surface. The moment they spot fish, the pelican hurls its large body straight down, and will dive from as high as sixty feet, making a huge splash and hitting the water with such force that fish may be stunned by the impact. The whole process is hard on the pelicans.

Once below the surface the pelican opens its huge bill, hoping to scoop up a fish or two. In addition to fish, the pelican also scoops up a considerable amount of water, close to three gallons. Since three gallons is more than it can hold, the pelican dumps the water before it is able to eat the fish. The pelican empties its pouch by keeping its head down, and slowly letting the water drain out of the sides of its bill. Once the water has drained out, the pelican flips its head back, and down the hatch go the fish.

Meanwhile, the Laughing gull is watching the pelican's every move. It is hoping that somewhere during the water removal/head-flipping process the pelican messes up and a fish gets away. If that happens it will swoop in and grab itself a meal, before the pelican recovers the lost goods. The gulls are not ashamed to land on the pelican's head and patiently wait for the right moment to take action. The pelican seems not the least bothered by the visitors waiting to either grab escaping fish or steal them right out of its massive bill. This somewhat peaceful co-existing behavior is actually quite uncommon in birds. Birds that steal food from other birds are called "kleptoparasites."

Kleptoparasitism or parasitism by theft is a form of feeding in which one animal takes prey or other food from another that has caught, collected, or otherwise prepared the food. The term is also used to describe the stealing of nest material or other inanimate objects from one animal by another. The kleptoparasite gains either by obtaining prey or other objects that it could not obtain itself, or by saving the time and effort required to obtain it. However, the kleptoparasite may run the risk of injury from the victim if the latter is able to defend its prey.

Before you think poorly about the Laughing gulls for stealing from the humble pelican, you should know that some pelicans are also guilty of kleptoparasitism. Not only will they steal from other birds, such as herons and storks, but they will also steal from fishermen, which totally upsets the local anglers.

Down in Antarctica a similar story unfolds. An Adelie penguin searches out the largest stones he can find to ensure that his nest is impressive enough to outshine his rivals and attract a mate. But as soon as his back is turned, the unfortunate penguin's hard work is undone by a work-shy rival who sneaks over and cherry-picks the best rocks from his pile. The situation will repeat itself several times, with the foraging penguin appearing completely unaware that the rocks he is working so hard to collect are disappearing each time he goes in search of another. He eventually figures out his neighbour's trick, and responds by angrily flapping his wings and chasing him away from his nest.

Adelie penguins, as well as Chinstrap and Gentoo penguins, build stone nests to raise their eggs off the ground and protect them from run-off when the Antarctic ice and snow melts. Male birds with the best nests are more likely to attract a mate, so the best stones in the spartan surroundings are highly prized. Because the nests are so close to one another – some just a few feet away – stealing from a neighbour is relatively simple. This amusing activity takes place several times until the hapless penguin finally works out he is being duped and chases off his rival.