Every year during the spring time I visit the resident osprey colony at Lake Blue Cypress a couple of times during breeding season from March until May.

Lake Blue Cypress is located in the middle of the state of Florida and got its name from the beautiful bald cypress trees that cover the edges of the round lake. The giant trees that stand in the water give you the feeling of traveling through a pre-historic scenery in a very peaceful ambiance.

Other than a local fish camp, which is operated by the Middleton family, there is hardly any human activity around the lake, with the exception of a handful of fisherman in little boats. Oftentimes, you are completely alone and surrounded by the sound of nature, and a screaming osprey population. 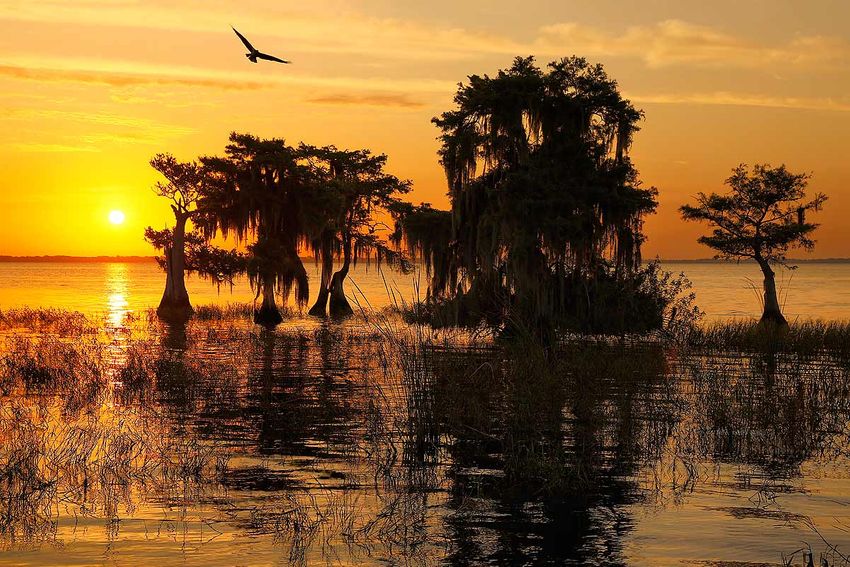 A large group of ospreys has chosen the lake as their annual breeding grounds. They love to nest on top of the cypress trees which gives them great protection and plenty of structure to build a solid nest. It is estimated that the total number of osprey pairs is in excess of 100. With hardly any natural predators, and water full of fish the lake provides a great place to nest and raise offspring. 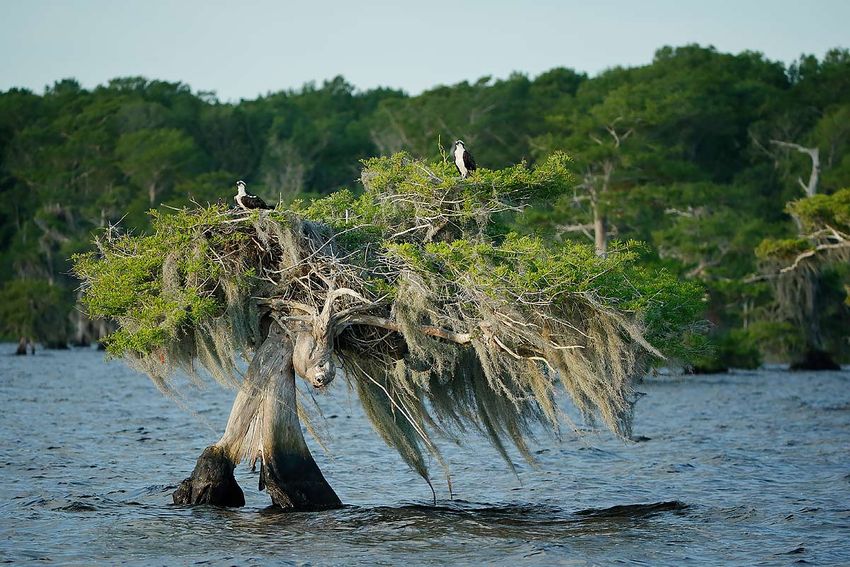 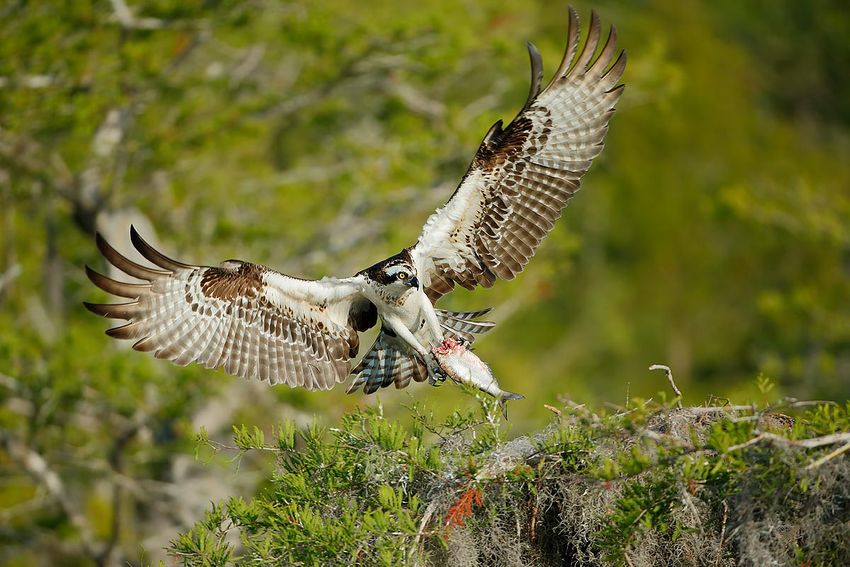 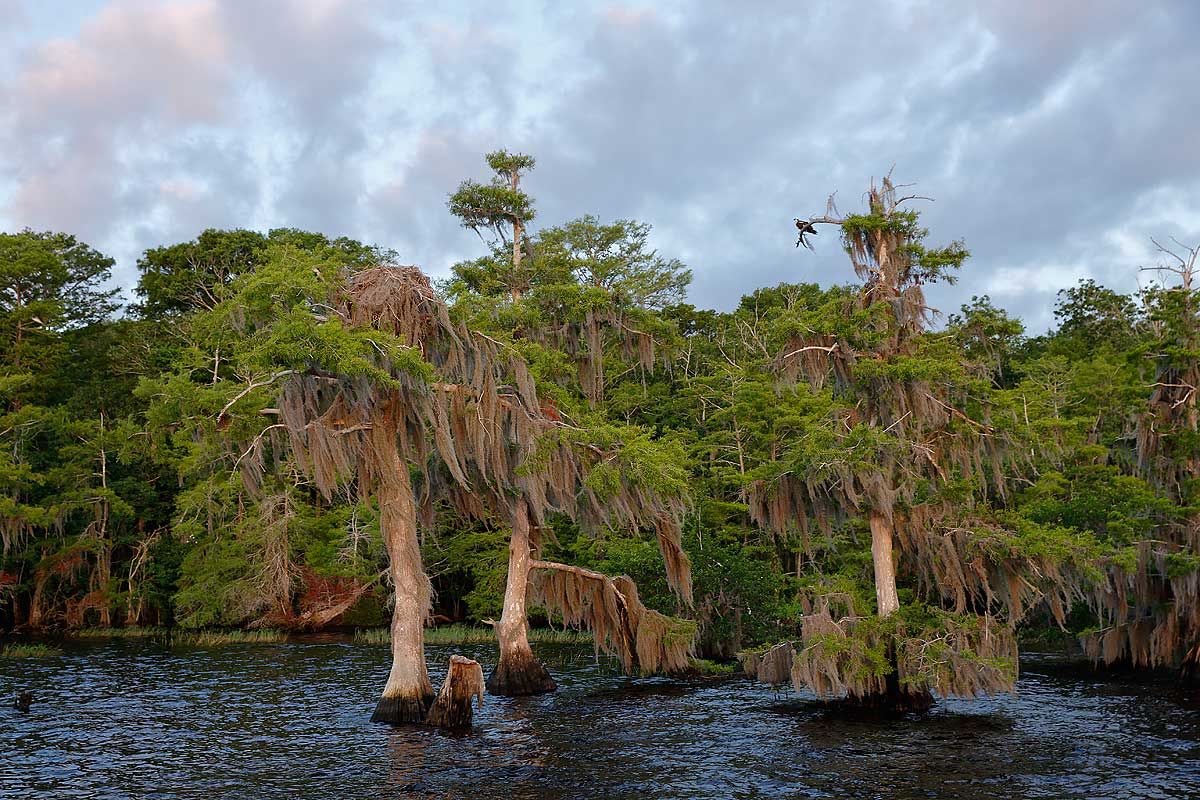 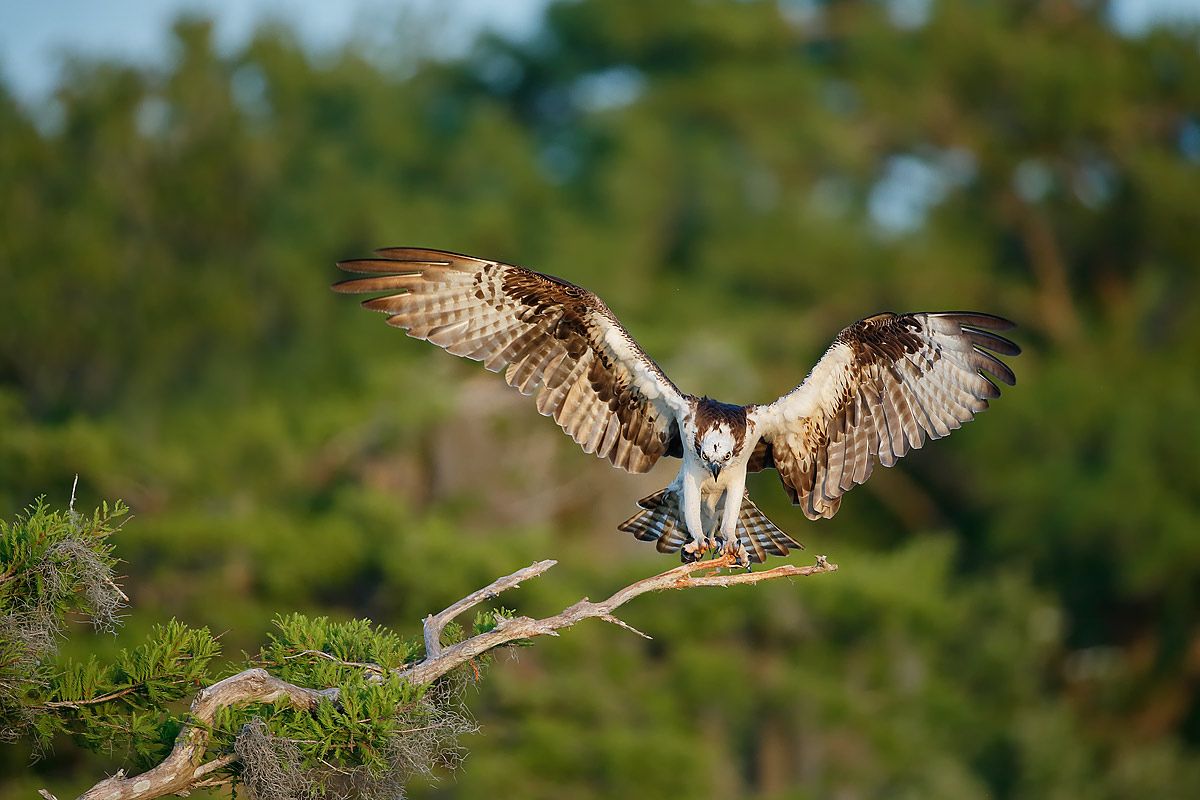 Ospreys are normally monogamous. One male mates with one female, and mating pairs stay together until one of them dies. The female lays one egg every day or every other day until she has laid two to four eggs. The male and female both incubate the eggs, which hatch after about 40 days. Because the eggs are laid one or two days apart, they also hatch one or two days apart. Chicks that hatch first are bigger than the other chicks and are usually dominant over the smaller chicks. If the parents cannot provide enough food for all of the chicks in the nest, the smallest chicks do not get enough food and sometimes die.

Male and female ospreys both care for their young. They feed the chicks and protect them from predators and cool, wet weather. The male provides all of the fish for the chicks before they can fly. This means that males have to catch up 10 fish each day for the female and the chicks. The parents tear the fish into small pieces for the chicks to eat. Osprey parents hunt fish for their chicks until the chicks can hunt enough fish to feed themselves. Chicks can usually feed themselves two to eight weeks after they begin flying. 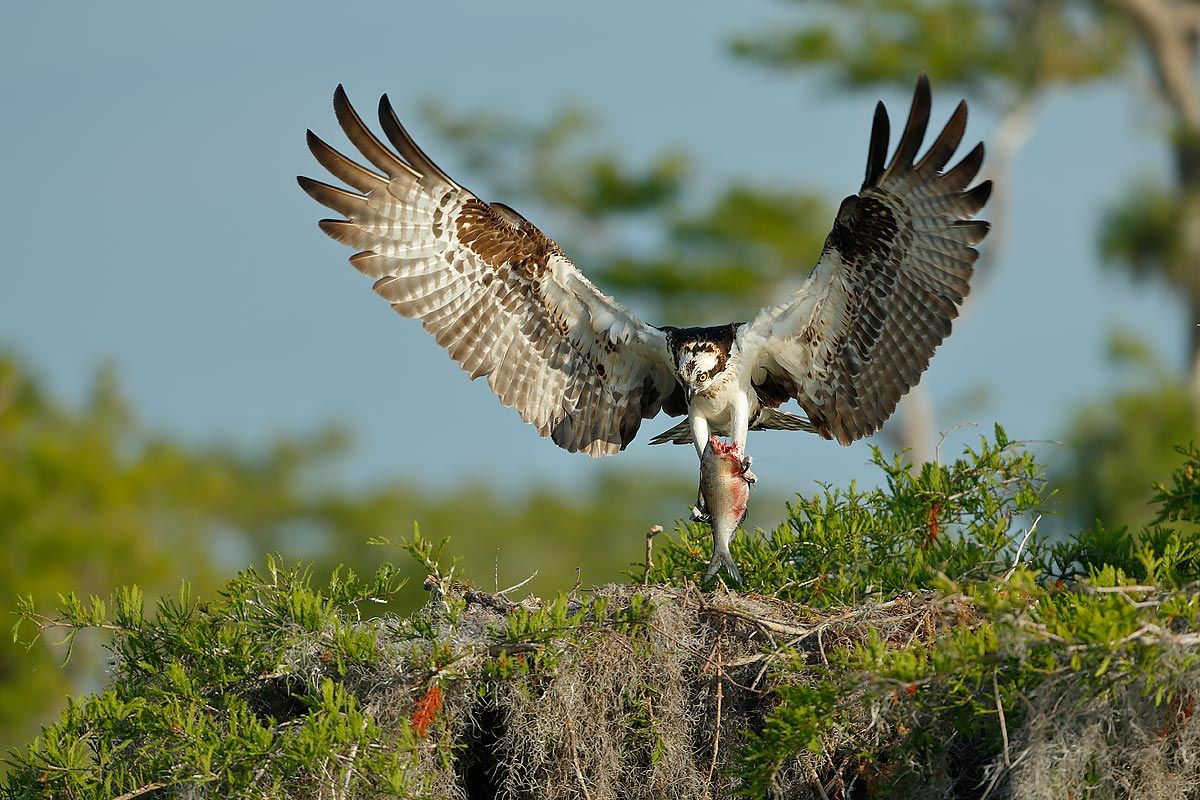 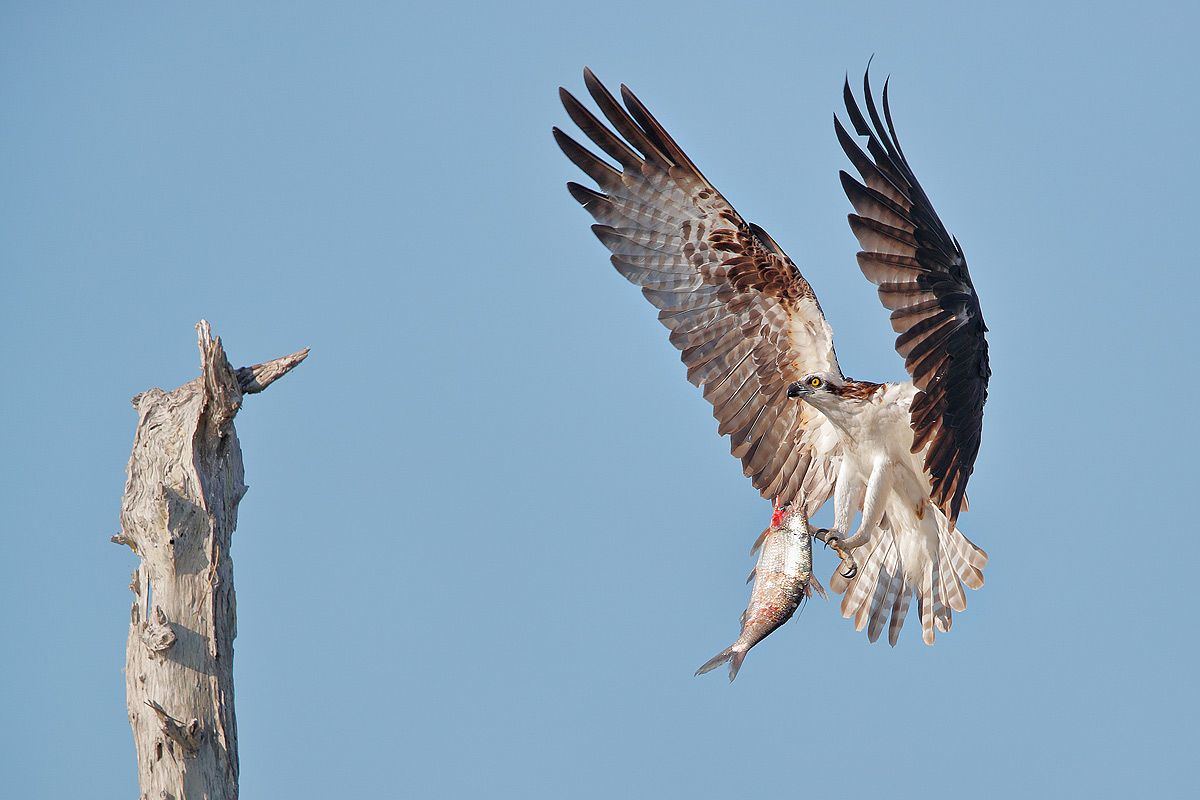 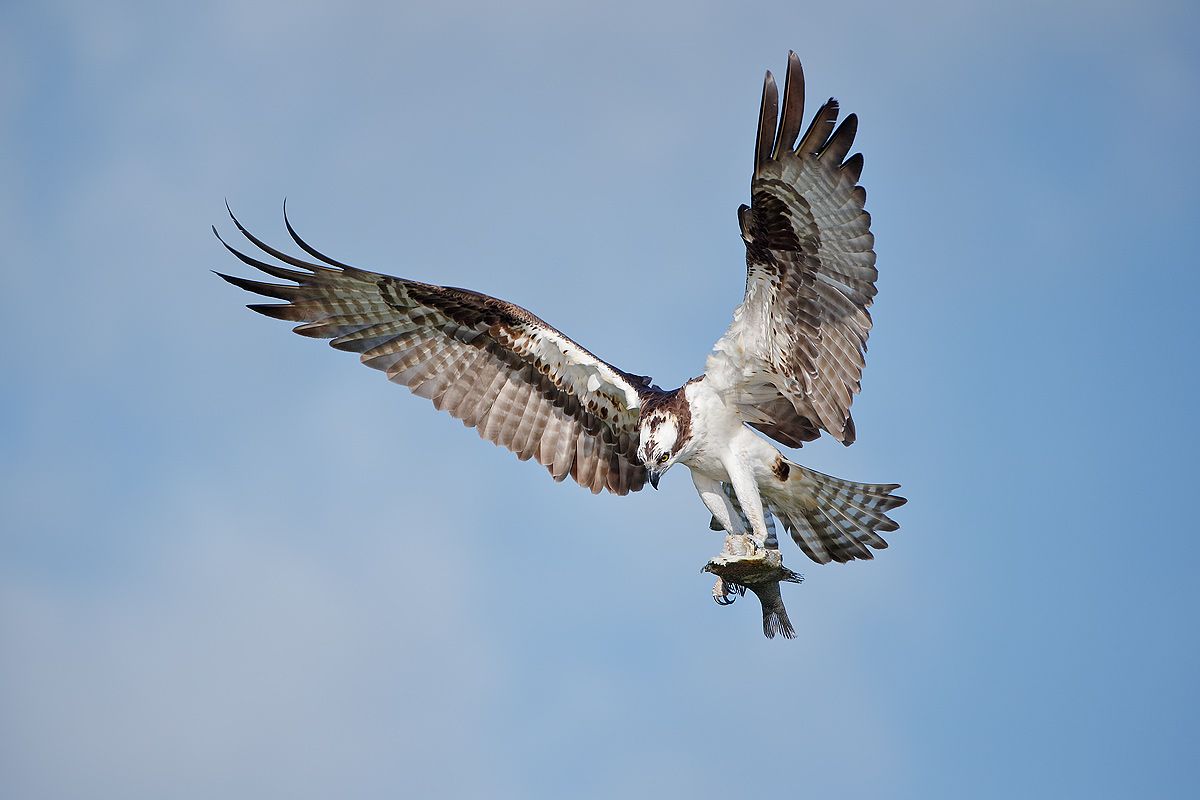 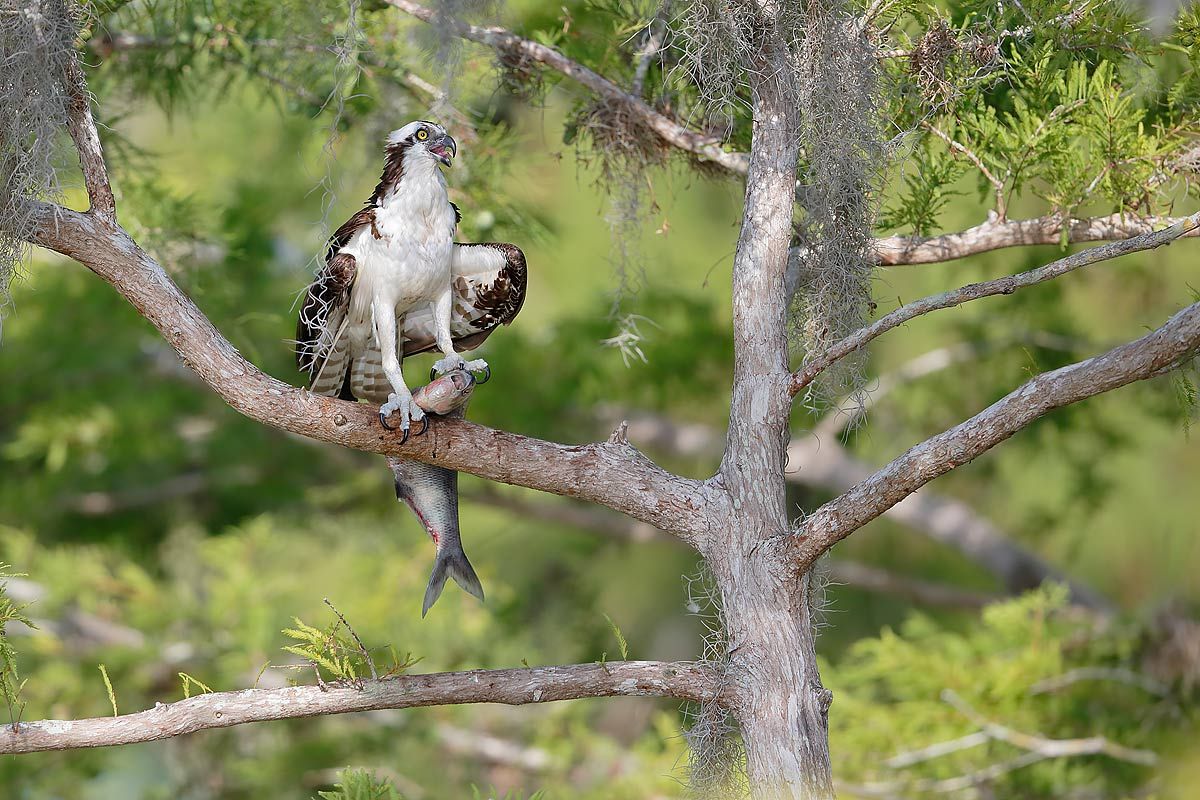 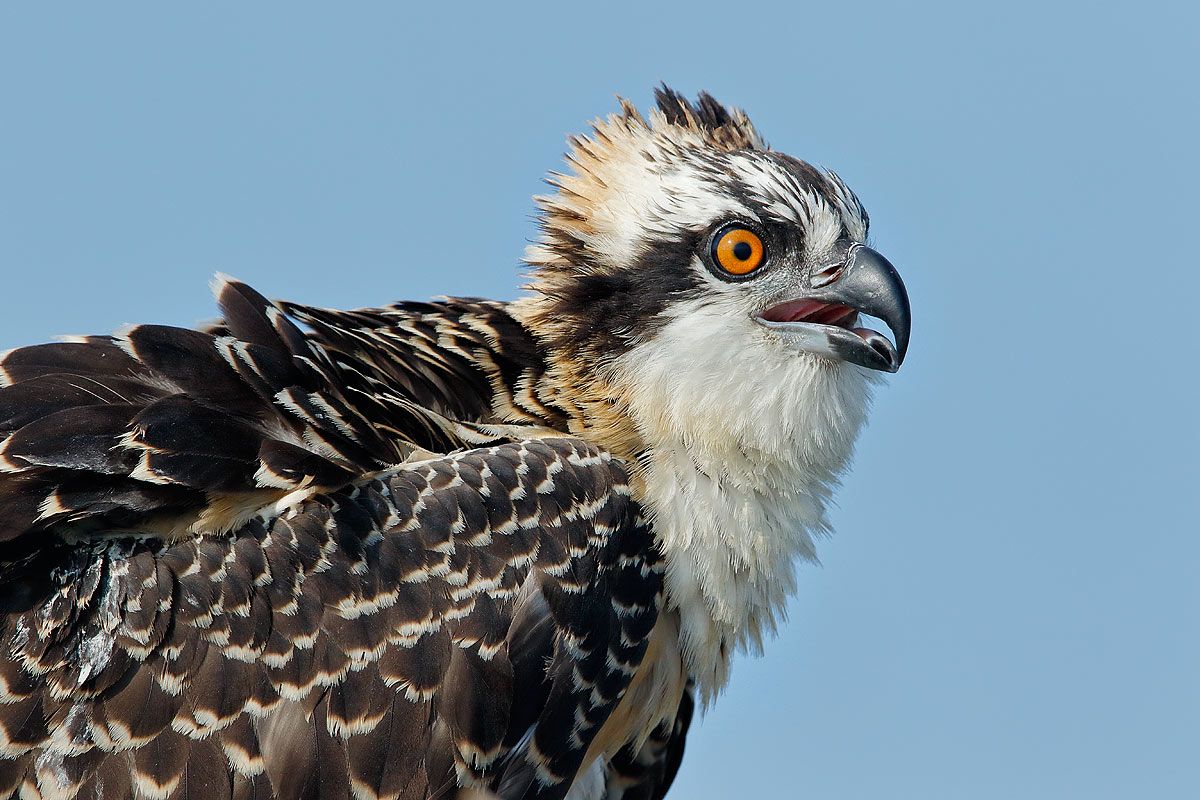 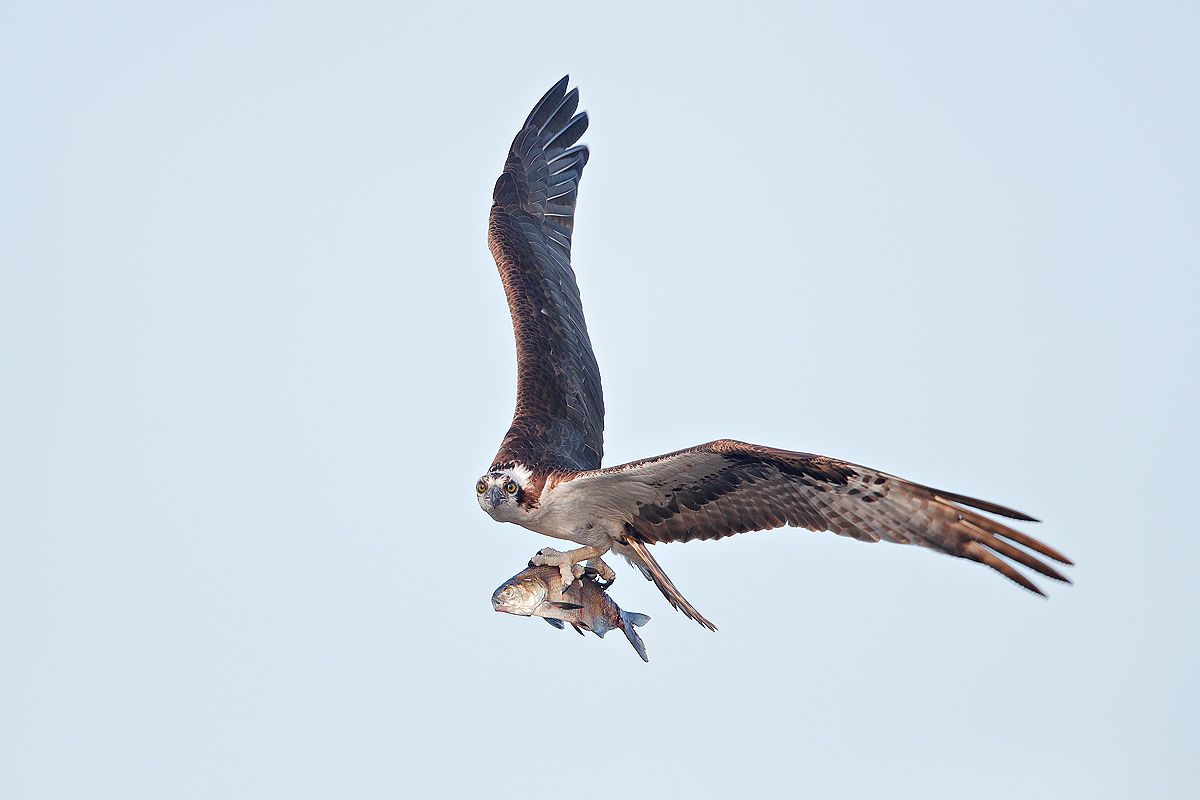 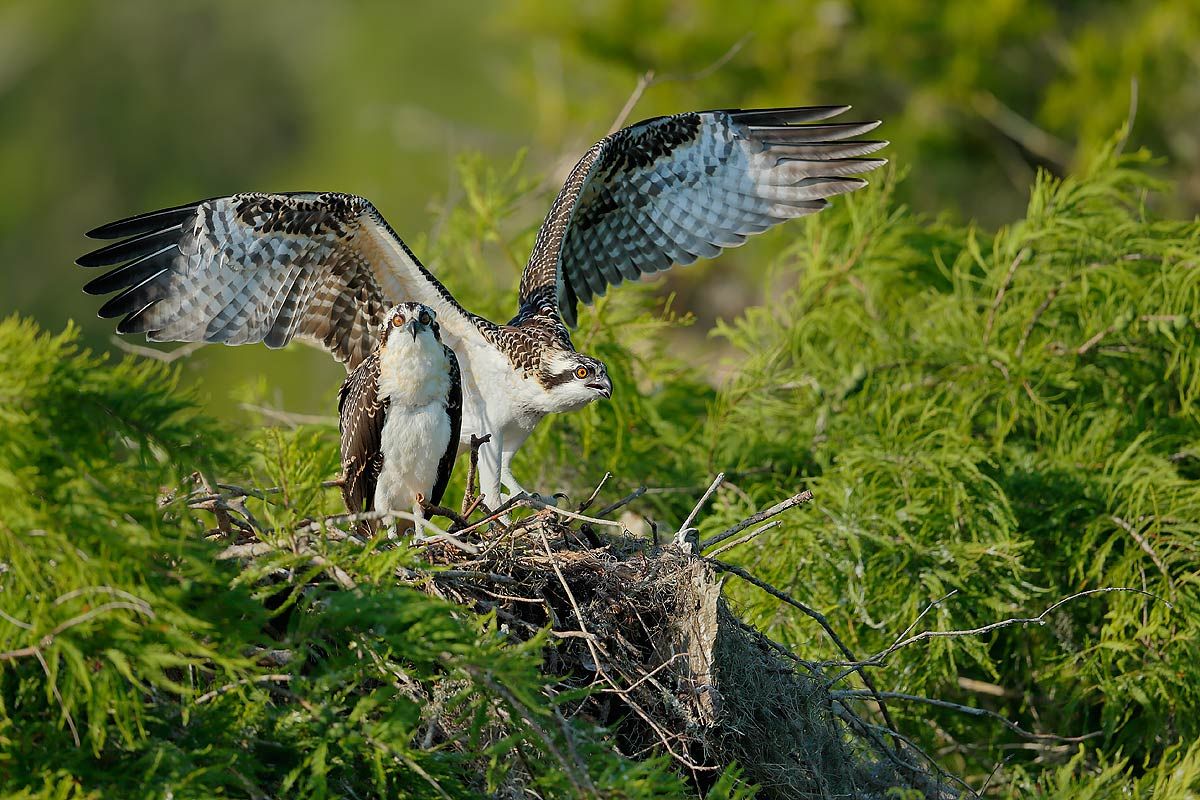 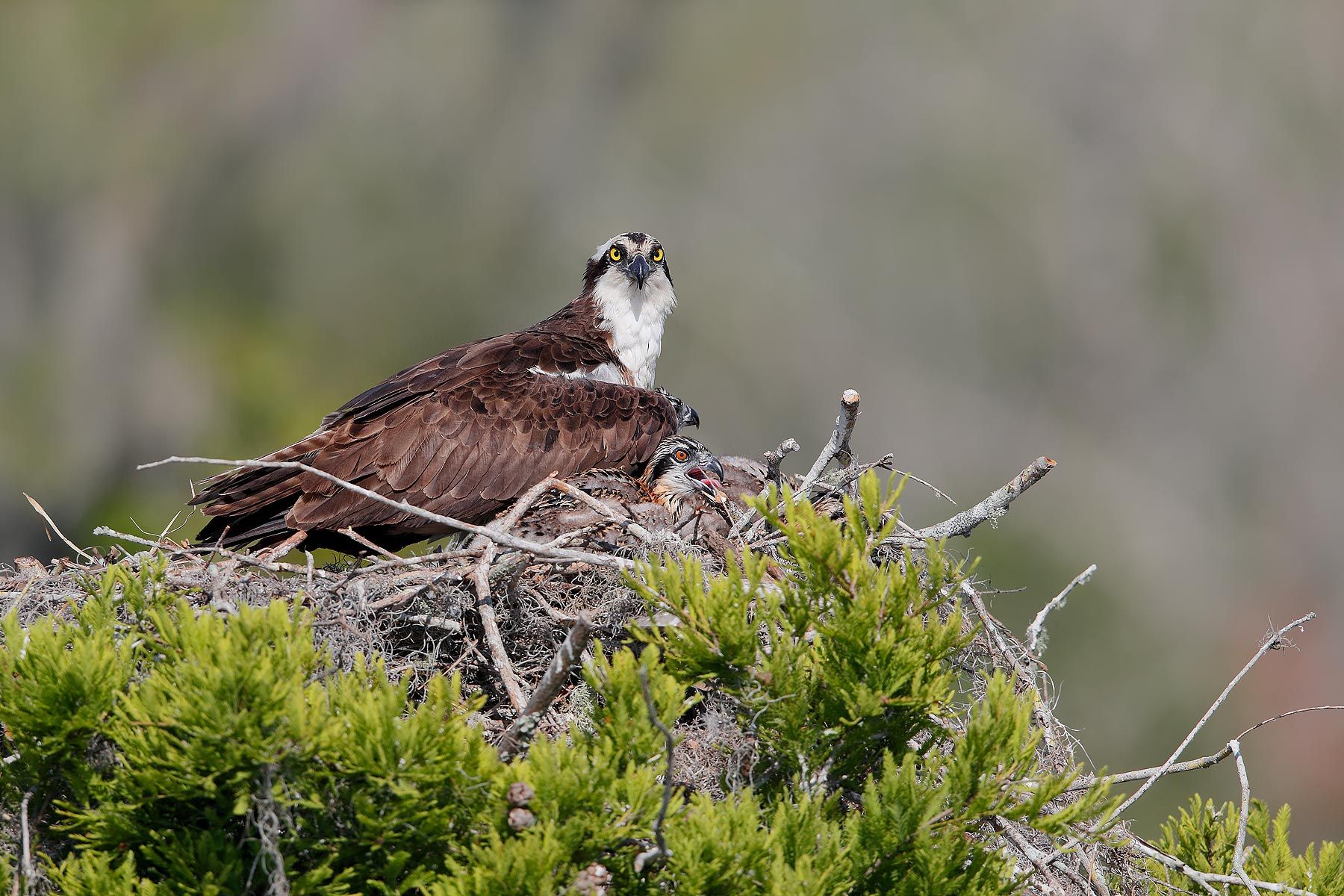 During the first few weeks after hatching, osprey chicks cannot control their body temperature very well. The female parent broods the chicks frequently for the first two weeks and during very hot or cool weather until they are about four weeks old. Both parents spend a lot of time protecting the nest from other ospreys and potential predators.

During my visit in late April with my wife Adri, the weather was great for photography. A calm morning with easterly wind would be perfect for landing osprey on their nest in the cypress trees. As with all things in nature photography, even the best circumstances do not guarantee success.

The flight activity on the northwest side of the lake was pretty decent, but the ospreys were not really cooperative, and instead of landing on the nests, they decided to wait in nearby trees, or leave the immediate area of the nests completely.

It was already late in the breeding season for the resident ospreys, as many of the chicks have hatched and are getting close to adult size. The need to protect the nest and keep the eggs warm decreases as the breeding season advances. After a slow start on the northwest side I decided to check out the south side of the lake hoping for better opportunities.

While I was photographing two grown chicks on a nest, Adri noticed a aerial chase between three ospreys well over the lake. They were too far away to get some decent flight images, even with the 600mm lens I was using for the chicks on the nest. A short while later, one of the ospreys was in the water, and was getting dive bombed by the other two ospreys.

Initially, we thought that a recently fledged chick had miscalculated its flight path and ended up in the water, and that the parents where trying to rescue the inexperienced flyer. Another possibility could be that the so-called “toe-drag” went wrong. Ospreys occasionally, drag their talons through the water to clean off dirt and nesting materials.

It looked like the osprey was in trouble. He was swimming in Michael Phelps style but could not get airborne. I carefully steered the boat towards him to see if he needed help. The two attacking ospreys left the scene as we came closer. Looking through my long lens I noticed that the bird was bleeding and apparently hurt.

While getting closer, he noticed the boat and changed his course towards us, as if he knew that we were there to help him. I carefully lifted him out of the water by his wings while his claws jammed into my hand. After folding his wings we wrapped a towel around him to calm him down and to be able to assess his wounds. It appeared he was bleeding from his nostrils, but other than that he had no other visible wounds.

We kept him wrapped in the towel and cleaned up his beak and nostrils to stop the bleeding. He was extremely calm and was even seeking eye contact with me, as I assured him he would be fine. It is a special feeling to experience a connection with such a beautiful wild raptor.

Although the osprey was seemingly fine, he was obviously in shock, so I had to come up with a plan. The nearest wildlife rescue center is in Stuart, more than an hour away, so that was no real option. The best plan was to put him back in his own environment at a spot where he could regain his strength and dry out. We carefully dropped him off in an abandoned nest on top of a small cypress tree closer to the lake edge. He looked relieved and confused at the same time.

We kept an eye on him for about an hour to see how he was doing, while trying to understand what really happened, and how he ended up in the water. A closer look at his feathers and the color of his eyes proved that it was not a fledgling who made an honest but possible deadly beginners mistake. In juvenile ospreys, the brown body feathers have lighter margins, thereby giving them a scaly look, which makes them easier to distinguish from the adults, and the color of the eyes is more orange than yellow. Our friend had yellow eyes and a nice pack of chocolate colored feathers, all suggesting that he was an adult bird, possible a sub-adult only 3-5 years old. 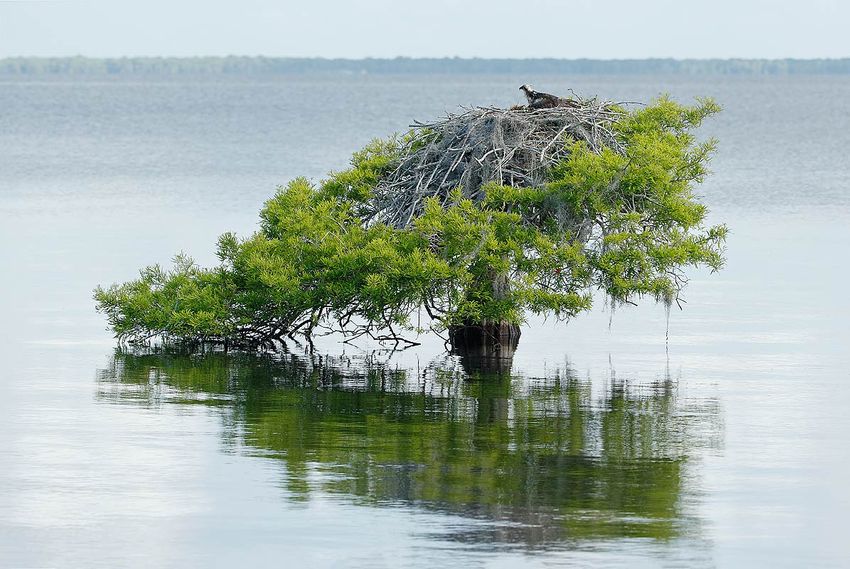 After a bit of time he started shaking and flapping his wings helping him to dry quicker. The bleeding had stopped and he looked more alive. We left him on his perch feeling confident that he would live another day.

Further reading and research pointed towards a case of agonistic behavior among ospreys. Agonistic behavior is any social behavior related to fighting and it often includes threats, displays, aggression and submission. The behavior revolves mostly around defending nests against other osprey, especially in areas where the nests are located very close together, as is the case with the osprey at Lake Blue Cypress. 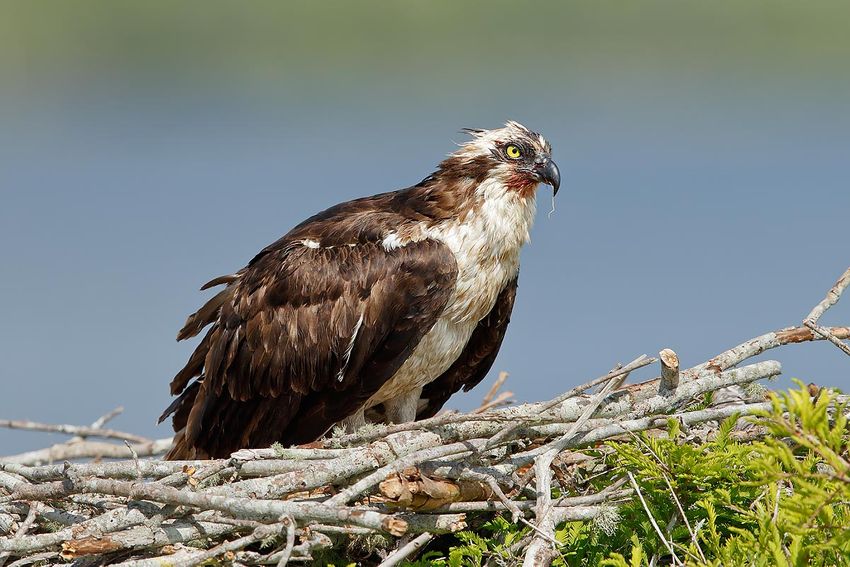 Defending the nest is critical and often intense when young chicks are around, and it includes calling and displays such as wing-shaking and fanned tail feathers. If that does not scare the intruder away vigorous aerial chases often ensue if the intruding osprey approaches the nest too closely. Anecdotal evidence suggests that (very rarely) individuals may be injured or even killed in such fights and aerial chases.

What we had witnessed was an aerial chase gone wrong, which started when our friend tried to intrude on an already existing nesting pair. In an attempt to defend their nest and fledglings the osprey parents went after our friend and knocked him out of the air and into the lake. We did not see this particular moment, but witnessed the dive-bombing. The bleeding was the result of the wounds inflicted during the dive-bomb attacks.

In dealing with a situation like this it is always difficult to know if you did the right thing. Interference by humans with the natural environment can lead to both good and bad things, but my initial instinct was to save an otherwise helpless bird, which would have drowned in the middle of a lake. For me it was the right decision, and we felt good about saving a beautiful raptor’s life.

What would you have done?